Royal Crown (With an ornamental hairpin) 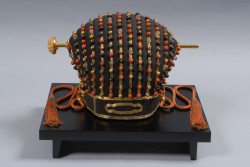 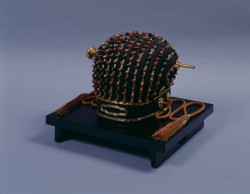 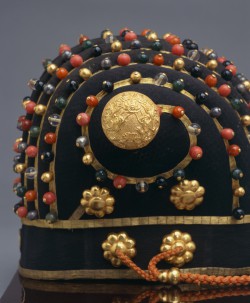 The Royal Crown is also called HIBENKAN or TAMANCHAABUI. Along with a formal costume gifted by the Chinese emperor, it was a formal wear for the king at such nationally significant events as SAPPO (enthronement of the king) and the New Year's celebration. Black silk crepe was attached to the crown's surface, and 12 of tape shaped golden threads were sewn on it. 7 kinds of 24 beads - a total of 288 beads - including gold, silver, coral, and crystal were tacked on each golden thread. A dragon, the symbol of the king, was engraved in the golden ornamental hairpin.