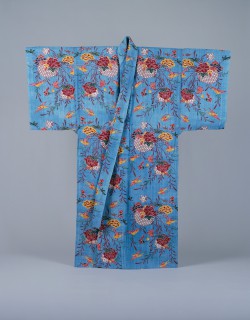 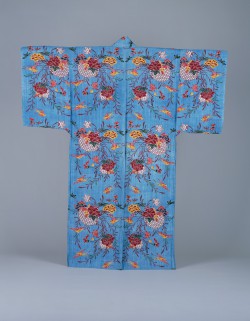 This is a formal summer costume for women called "NCHANASHI" among the royal family. The design depicts 4 different shapes of swallows that are flying around the flower baskets of peony. These patterns are appeared in the back of bright blue color which reminds of sky. This was worn over a smocking jacket called DUJIN and a wraparound skirt called KAKAN, and it was worn without a belt. Only high-ranking people were allowed to wear this type of costume with large patterns, so it is considered as the costume for the royal family.