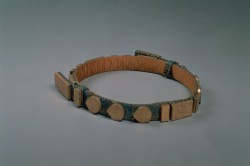 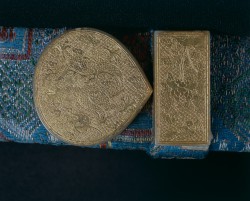 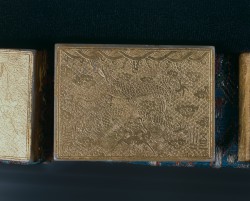 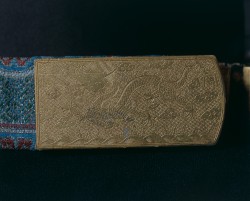 This is a belt which was worn when the Kings dressed in costumes for ceremonies. It is also called ISHINUMIUBI. The belt was formed by a layered core which was covered with cloth. 5 kinds of stones - a total of 20 stones - including square-shaped and chestnut-shaped stones were attached on the belt. Dragon, long-tailed chicken, peony and other patterns were carved on each stone, and they were covered with gold leaf. It was gifted by the Chinese emperor along with the Royal Crown and ceremonial costumes to authorize the Kings of Ryukyu Kingdom.