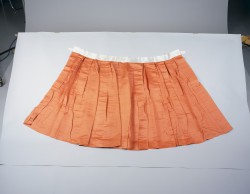 KAKAN is a wraparound skirt type of undergarment. It is assumed that the document of the Sho royal family was described about the costumes that the king wore for the king's enthronement. KAKAN is believed to have been worn under a ceremonial costume named TOUISHOU which was gifted by the Chinese emperor.