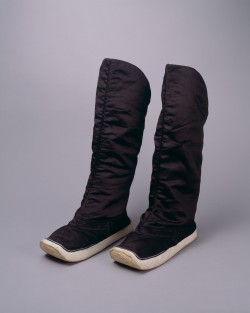 These shoes were worn by the Kings of the Ryukyu Kingdom along with TOUISHOU (the ceremonial costumes of the Kings, gifted by the Chinese emperor). They are also called UKANKU. Black satin silk was used for outer material, and a bright green arabesque patterned fabric was for lining. Soles were made of leather, and silk cloths were attached to toe parts. Hemp yarn was stitched into back of the soles, and silk thread was used for toe parts. Both parts were stitched onto few layers of cloth. These shoes are considered to be worn by the Kings of the Ryukyu Kingdom who were enthroned during the Qing Dynasty because the shoes were not worn for HIBENFUKU, the ceremonial costume during the Ming Dynasty, under the rules of costume.